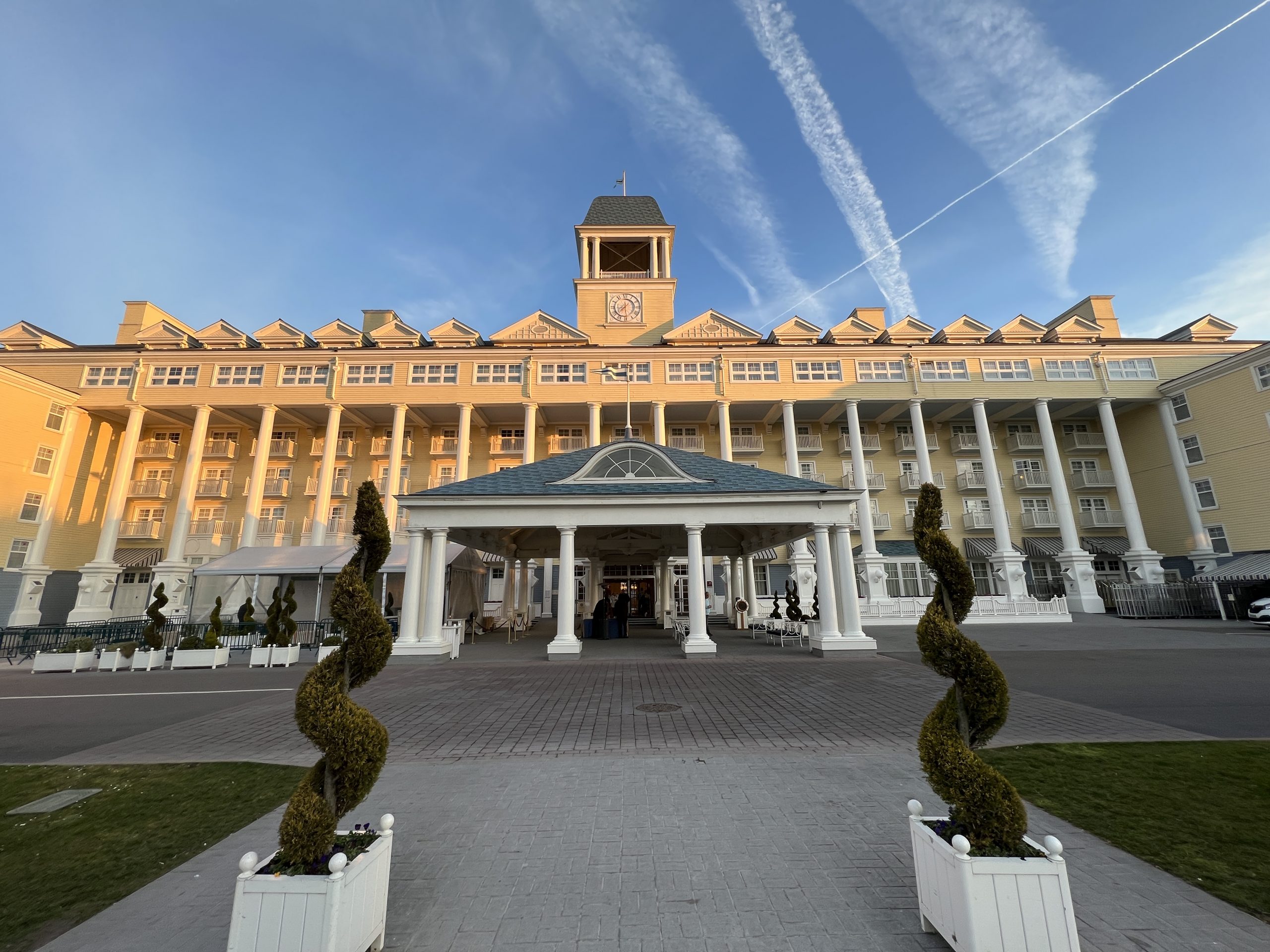 The Nerd was thrilled to be back in Paris and stayed at Disney’s Newport Bay Club for the first time…SPOILER: It’s a great property!

Also read our guide to shopping in Disneyland Paris.

The Disneyland Paris official site is an interesting beast.

Sometimes prices can fluctuate based on where you indicate you are from (the UK often has great deals but requires a UK address to book) on the website.

The Nerd likes booking direct, but the last 20-30 times we’ve attempted to book Disney’s Newport Bay Club – and the other hotels of the Disneyland Paris Resort – Expedia has beat the official web site nearly every time.

Plus, the official Disneyland Paris site is cumbersome and is often difficult to break up the room only rates from those that include meals. Expedia, and other third-party booking sites, on the other hand are straight-forward.

It’s usually cheaper and often a very good deal to include length-of-stay tickets through Expedia.

And the price for Compass Club (more about this later), Disney’s Newport Bay Club’s concierge level was affordable; so we will get to that!

By and large, the room options are the same as just about any Disney World property – you have standard view and water view or concierge (aka Compass Club at Disney’s Newport Bay Club) or not – and the Nerd opted for a Compass Club standard view room.

The rooms are a little larger and decorated a little nicer, but most rooms at Disney’s Newport Bay Club are reasonably similar.

Compass Club at Disney’s Newport Bay Club included a few things that made it worth trying for the Nerd. First, there is a Compass Club-only check-in area. Given the notoriously slow check-in at Disney hotels, the Nerd thought this was worth a shot. It took only a few minutes to be handed a key and sent to our room (but in a good way!).

The team at Compass Club check-in had everything ready for the Nerd’s stay!

Compass Club includes breakfast and complimentary soft drinks throughout the day. This ended up helping offset the price quite a bit – breakfast was a nice spread and conveniently located. The Nerd stopped by – on the way to taking a break and on the way back to the parks – often and grabbed a Coke/Coke Zero or water to go. The staff was terrific!

Plus, the club offers Tea Time every afternoon, the soft drinks were mentioned but it’s worth noting that it was a good way to relax in the Compass Club after the parks closed for a bit to unwind, assistance with dining reservations, and valet parking.

Disney’s Newport Bay Club offers everything you might expect – a regular check-in area, boutique, two restaurants, a swimming pool and fitness center. The pool was HUGE and featured an inside and outside pool (though the outside was closed during our March visit). The gym was well-equipped and the service throughout the hotel was very good (though Compass Club service was a notable step above).

One of Compass Club’s most endearing qualities can also be one of its challenges. Specifically, the intimate check-in area can backfire if there are issues and the area is not properly staffed. Case in point, the Nerd had requested – and was granted – a late 1pm check-out instead of the normal 11am departure. The one caveat? A trip to the Compass Club front desk would be required the day of check-out.

Dutifully, the Nerd reported to Compass Club for a new key to find only one person on staff, one group checking in and two others in line. It took about 10 minutes – a frustrating 10 minutes keeping in mind that we paid extra and there were two un-staffed desks while people queued in main entrance – to wait in line and get the key card updated. Sadly, like many Single Rider queues, it would have been better in this instance to wait in the regular line!

Traveling to Europe always exposes some quirks and this trip was no different. The most interesting of which was the AC/Heating system. Although it was cool during our trip (days were a high of 50-60 and a low in the upper 30s), the room was quite warm upon arrival. After fiddling with the thermostat for quite some time, the Nerd finally gave in and called for assistance. The answer was shocking.

Because it is winter, the Nerd was told, the AC cannot be turned on in the rooms. Huh? The Nerd likes a cold room! After some back and forth – the the Disney team trying to turn on the AC remotely – we realized it was not going to happen. The problem was how to cool down the room from the +/- 75 degrees upon arrival. The solution? We turned the heat all the way down (68 was the lowest heat setting, but would not actually cool down the room) and they quickly delivered a fan.

Despite the quirk, it all worked out and the Nerd slept like a baby!

It is much nicer than the Sequoia Lodge if not as nice or new as Disney’s Hotel New York: The Art of Marvel or as nice as the flagship Disneyland Hotel (which often runs $800-900/night or nearly double Newport Bay Club).

The Nerd highly recommends this hotel and, if the pricing is right (factoring in the check-in convenience, breakfast savings – which could be significant – and drinks throughout the day) Compass Club!